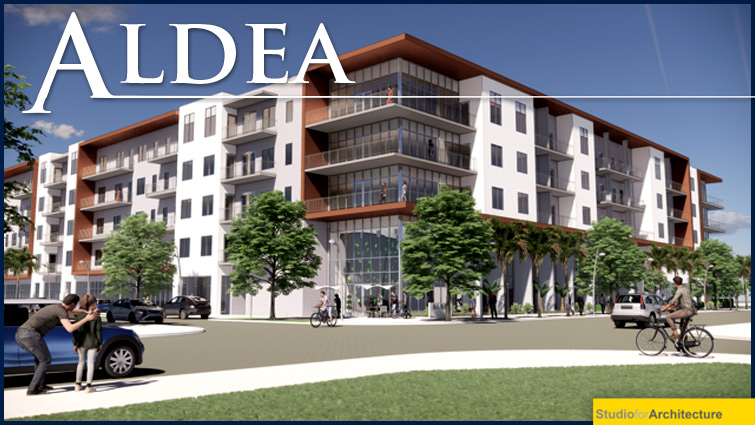 As taken from Gulfshore Business:
“A big piece of the puzzle fell into place this week with the redevelopment of Midtown, a 240-acre area just south of downtown Fort Myers.

The Fort Myers city council voted unanimously Monday night to rezone 5.7 acres off Fowler Avenue to allow for an apartment complex. A $60 million construction project, with DeAngelis Diamond as the lead contractor, should begin early 2023. Ron Reitz of Studio for Architecture did the design.

Called Aldea, which means “town” or “village” in Spanish, the complex will have 305 units on five stories with a parking garage and a rooftop bar view of the Caloosahatchee River. There also will be 30,000-square-feet of commercial space fronting Fowler for a restaurant and retail.

Demolition of the existing Rams Plaza strip mall and most of the industrial-type buildings adjacent to it, stretching west to Central Avenue, should begin late next year. Rams Plaza currently has Tropical Supermarket, a barbershop, Ocean Seaford market and a few other small businesses. The Central Avenue buildings include an indoor batting cage used by youth baseball players.

Real estate broker Randy Krise’s company bought more than half the land two years ago. His company paid $1.565 million for the land off Fowler and $825,000 for 2115 Central Ave., in September 2020. “We bought it with the intention of building apartments there,” Krise says.

The city of Fort Myers’ acquisition of 2442 Martin Luther King Jr. Blvd., the former headquarters of The News-Press, with the original intent to relocate the city police headquarters there, also played into Krise’s decision. “We thought, if the police station is there, that will make it safe,” Krise says.

A new city manager and new Fort Myers city council members could mean a different future for the former News-Press property. Time will tell. But Krise said the time was right to make his move on more apartments for Midtown. The city also vacated the northern part of Royal Palm Avenue, which will become part of the Aldea development.

Developer Joe Bonora is working on another nearby apartment project. Montage at Midtown, a 321-unit complex, should break ground in 2022. It will be just across Central Avenue from Aldea and will have Union and Victoria streets as north-south borders and Central and Jackson to the east and west.

“We need more rooftops,” says Matt Simmons, a property appraiser with Maxwell, Hendry & Simmons. “We are way underhoused. I really like that project site. Things are starting to fill in. A lot of that land has been spoken for. It’s really more so Midtown starting to really materialize. It’s people recognizing that Midtown is going to create change in that area that we haven’t seen in a while.”